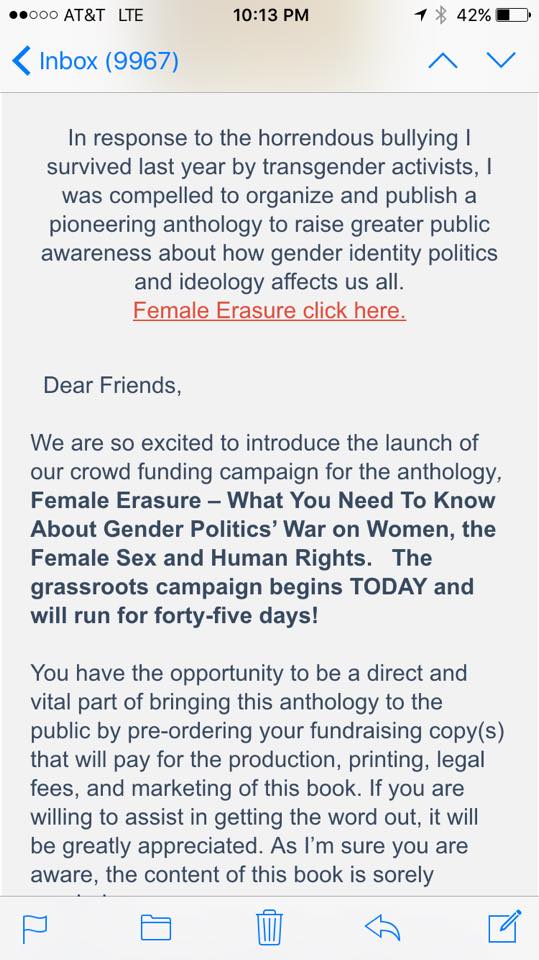 For years you lived in my region, and were a major player in our local community. You were the Pagan musician, the public-ritual priestess, the face of Dianic Craft in particular. And yeah, you were putting “women born women only” on your flyers even then, but twenty years ago I didn’t have as much lived experience and information on what that really meant. So I put up. Not enough to go to those rituals, but I bought the CDs, bought the books, bought feathered headdresses and other tchotchkes from you, chatted pleasantly at fairs. Because hey, your focus was your focus, but that didn’t mean we weren’t all witchy women together, right? Different jobs on the same side?

It never dawned on me that my own High Priestess’s insistence that I wasn’t connected enough to my “feminine side” when I wore jeans might be something she’d picked up from you. And I never wondered about the people “women born women” was meant to exclude, beyond the vague thought that I probably wouldn’t bother to exclude them myself.

I know that there are members of my generation, and I think also of yours, who were what the kids today would call genderqueer, but we parsed it differently. We decided to circumvent insulting questions about whether we were “REAL women” by saying “of course we are, we have female plumbing.” We made the call that that was where the definition should lie, where the line should get drawn. And when time passed and both science and lived experience started saying that wasn’t going to be the best answer, some of us did what people who fall a step behind so often do: freak out and double down on shrieking, spiteful obsolescence.

I know better today. I know more transgender people. I know my daughter, for one. Are they identical to you? No. But then, neither was I. I wore pants and fraternized with both men and women. But hey, I was born with a vagina, so by the rules of gender essentialism, which are otherwise appealed to most by people who want to make it women’s only job to pop out babies, I count and they don’t, right? Not only that – it’s not enough any more, I guess, just to exclude them from your own groups, which while tacky and hateful is at least your prerogative – but it’s time to start pumping out literature about how transgender people are out to destroy womanhood for everyone.

Which is fucking sick, Ruth. It makes me physically ill. It makes me wish I were the kind of people who burned CDs and books, because I feel ritually unclean at the thought of your early influence on my person. I wish I could take back the money and the pleasantries. No transwoman on Earth could be as much of a threat to Womanhood as this is to human decency. In other words, if it’s to be war, Ruth, then we are not on the same side.

And that be thine,

And nevermore let them entwine.